With the appearance in March 2018 of Volumes 12 and 13 of The Collected Works of Dieterich Buxtehude, edited by Dr. Paul Walker of the Notre Dame Department of Music, the nearly 100-year project to 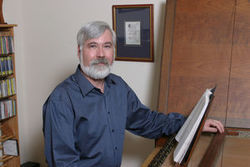 present the composer’s complete œuvre in scholarly editions has finally reached its goal. It was a special challenge and distinction for Walker to edit these last two volumes because they include many of the composer’s largest works, in both length and size of performing forces. Volume 12 in particular, the largest of the entire set, includes only six pieces but would take nearly an hour and a half to perform in its entirety. Volume 13, while less extensive, encompasses many more pieces, including the only Buxtehude work for six voice parts, all of the composer’s occasional works (for weddings or funerals), and some puzzle canons. A project that began in Germany between the World Wars now finally crosses the finish line in 21st-century America due to Walker’s expertise as a leading scholar on 17th-century music.

Dr. Walker says that the process of preparing the final two volumes was a long and difficult one. “It was a great honor to be chosen to edit the final volumes to appear in the set, but the work took over a decade from start to finish. For one thing, the pieces remaining to be edited were initially slated for a single volume until their large scale rendered this idea impractical. For another, many of the original sources are in an obsolete notational system known as German Organ Tablature, a letter notation favored by organists of Buxtehude’s time but abandoned forever by the following generation. Transcription and proofreading from this older notation is a very labor-intensive process. I’m just so relieved that the volumes have finally appeared.”

Buxtehude was one of the most important of the German predecessors of Bach, so important, in fact, that Bach walked all the way to Lübeck as a young man to experience Buxtehude’s famous Advent concert series known as the Abendmusik.

In the words of Music Department Chair Peter Smith, “It is a major milestone for the musicological community, as well as the world of early music performance, to have all of this music now available in rigorously researched and thoroughly proofed editions that omit no detail in their presentation. The editions will be the gold standard for decades to come, in no small part due to the efforts and expertise of ND musicologist Paul Walker.”