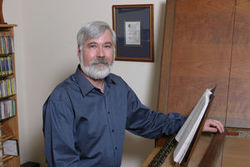 At Notre Dame Prof. Walker teaches private organ lessons to undergraduates and to MSM students not concentrating in organ as well as the two-semester sequence Organ Literature. He also serves as supervisor of the various placements in churches in the area and in the basilica.

Current research projects include a book on the history of the fugue before Bach, an article about and edition of a chansonnier published in Venice in 1535, and the final two volumes of the Complete Works of Dieterich Buxtehude for Broude Brothers.

Paul Walker holds a Master of Music degree in organ performance from the University of Kansas and a PhD in musicology from the State University of New York at Buffalo. Before coming to Notre Dame he taught at Yale University, the University of Chicago, and the University of Virginia. He also has a lifetime of experience as a practicing church musician; most recently he was minister of music at Christ Episcopal Church in Charlottesville, Virginia, from 1995-2011.

Walker’s scholarly work focuses on the early history of fugue and more generally on the music of the sixteenth and seventeenth centuries. He authored the articles on fugue and related topics for New Grove II, and his bookTheories of Fugue from the Age of Josquin to the Age of Bach (University of Rochester Press, 2000) won the American Bach Society’s biennial William H. Scheide Prize in 2002. He has also published  a number of musical editions and is a member of the editorial board for the Collected Works of Dieterich Buxtehude published by Broude Brothers. In 1991 Walker founded the vocal ensemble Zephyrus, which he led for twenty years of concerts as well as five produced recordings and three different week-long opportunities to serve as choir in residence at Christ Church Oxford, Ely, and Durham Cathedrals in England. Zephyrus’s final CD, entitled Fifteenth-Century Choirs, was released in 2010.