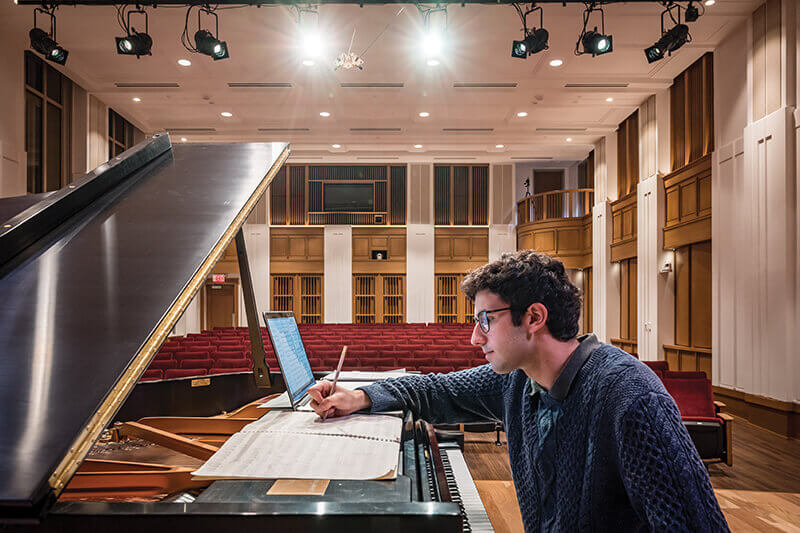 When he graduates in May, Alex Mansour plans to become a composer.

Well, that isn’t accurate exactly — though he’s still a full-time student, Mansour is already a composer. If you’ve been to a football game or watched a Notre Dame promo video in the past couple of years, you’ve probably heard some of his tunes. But in a few months, the darling of the music department will be taking his talents to the big leagues. As he plans his next steps, Mansour looks forward to a career that features piano, cello and composition — an ambitious but appropriate trajectory for a student whom Department of Music chair Peter Smith describes as one of his most well-rounded.

During his three-and-a-half years at Notre Dame, Mansour has become something of a go-to for departments around campus in need of new instrumental music. A shortlist of his assignments include a composition for the Notre Dame Symphony Orchestra and scores for the Sorin play and the Hesburgh documentary. On top of that, he is preparing a senior recital for his major in cello performance while juggling the rest of college life — including the 56 hours of non-music classes he’s had to take in order to graduate.

In his last months on campus, Alex continues to be busy applying to graduate music programs, playing with fellow music majors in a piano trio . . . and finishing off that last pesky Spanish class. There are a few final writing horizons to be explored, too.  To learn more about those projects and Alex's experience studying music at Notre Dame read the article about him in Notre Dame Magazine.