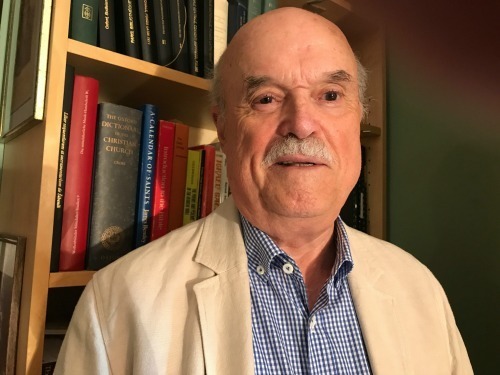 Professor Emeritus of Musicology Calvin Bower, was presented with the Claude V. Palisca Award at this year’s Annual Meeting of the American Musicological Society in Rochester, for his musical edition entitled The Liber Ymnorum of Notker Balbulus (Henry Bradshaw Society, 2016).

The Palisca Award honors each year a scholarly edition or translation in the field of musicology published during the previous year in any language and in any country by a scholar who is a member of the AMS or a citizen or permanent resident of Canada or the United States, deemed by a committee of scholars to best exemplify the highest qualities of originality, interpretation, logic and clarity of thought, and communication.

At the Awards Ceremony, committee chair Ross Duffin, Fynette H. Kulas Professor of Music and Distinguished University Professor at Case Western Reserve University, read the following citation: “Elegantly re-translating poetry and prose, the editor Calvin Bower presents profoundly detailed material in a user-friendly way, bringing to life a singular person and his work, and placing it in historical context. The music editions are originally conceived and beautifully laid out; the commentary on both music and text is extensive and authoritative. It fills an acknowledged lacuna concerning this important person and his works, widely and regularly performed for more than six centuries after his death.”