Music and Honors Mathematics major Katie Gallagher, ’19, recently completed a summer of viola performance studies at the Chautauqua Institution in western New York as part of the Chautauqua Music Festival. This was Katie’s fourth time in 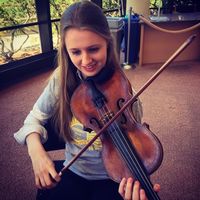 residence at Chautauqua. The Festival’s course of study is distinctive for its holistic emphasis on three core components: solo repertoire, chamber music, and orchestral playing.

While at Chautauqua, Katie performed with the Music School Festival Orchestra (MFSO) under the direction of Maestro Timothy Muffitt. Across the six-concert series, Katie served both as principal violist and a sectional viola member. Katie also performed with two different chamber ensembles, studying Schumann’s Piano Quintet and Mendelssohn’s String Octet.  The final performance of the Mendelssohn took place at the beginning of the final MFSO orchestra concert in the newly renovated, 4,400-seat Amphitheater.

For the solo component, Katie studied with Karen Ritscher, viola teacher at the Manhattan School of Music, and Almita and Roland Vamos. The Vamoses have taught at Oberlin and Northwestern among other distinguished schools of music, were named Distinguished Teachers by the National Endowment for the Arts, and have been honored at the White House seven times.

During the first three weeks of the festival, Katie participated in the Sigma Alpha Iota Competition, a concerto competition open to all members of the MSFO. She competed against musicians from the Juilliard School, the Cleveland Institute of Music, Eastman School of Music, and many others. Katie advanced to the finals where she played the Bartok Viola Concerto. Read more. As winner of the 2016 Notre Dame Symphony Orchestra Concerto Competition, Katie will be performing the Bartok Concerto in its entirety during the 2018-19 school year.

Here at Notre Dame, Katie studies with Prof. Tricia Park. “I have loved studying music here at Notre Dame. The faculty are amazing. Professor Park has really helped me with expressiveness and musicality. I have also loved that Notre Dame’s music department emphasizes the three components that I studied at Chautauqua—solo repertoire, chamber music, and orchestral performance. I also love the emphasis on academics that Notre Dame provides.” Katie will spend her junior year studying Mathematics at Oriel College as part of Notre Dame’s Oxford study abroad program.