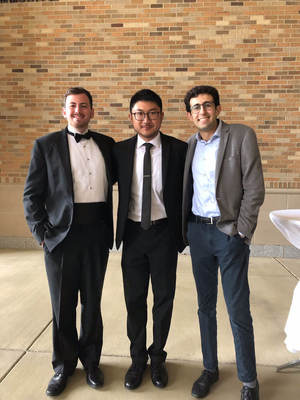 Faculty in the Department of Music are unanimous that the music majors in the class of 2019 are a highly-distinguished group, even by the Department’s stringent standards of excellence. Many of the Department’s majors study music as a liberal art and continue on either to graduate school or a career path in another discipline or profession. Every year the graduating class nevertheless includes a select few students with aspirations for careers in music, and with the talent and dedication to excel in that ambition. In recent years, the Department has placed students in masters and doctoral programs in performance at leading schools of music such as the Yale School of Music, the Peabody Institute of Johns Hopkins University, the Manhattan School of Music, and the College of Music at Florida State University, as well as in Ph.D. programs in music theory and musicology at such coveted departments as those at University of Chicago, University of California/Berkeley, and Brandeis University.

This year’s seniors continue the tradition, with the following students exploiting their musical studies at Notre Dame as a springboard to advanced professional training at some of the most competitive programs nationwide. The faculty congratulates these students on their impressive achievements and wishes them well as they embark on musical careers that are already off to such an auspicious start.

Gilbert Donohue graduates with a major in music with a double concentration in Vocal Performance and Music Theory/History (Honors), as well as a minor in Theology. In the fall, Gilbert will attend the Eastman School of Music to begin a Master of Music degree in Choral Conducting, where he will study with William Weinert.

Alex Mansour graduates with a double major in Cello Performance (Honors) and Film. He will pursue a Master of Music degree in composition at USC’s Thornton School of Music, where he will study with Donald Crockett and Andrew Norman. He will also serve as a teaching assistant in music theory and oral skills.

Andrea Rivera-Luna graduates with a degree in Saxophone Performance (Honors) and Biological Sciences. She will be working as a teaching assistant this fall at a middle school in New Haven, CT. She will then attend the Eastman School of Music studying for an MA in Music Education.

David Swenson graduates with a double major in Organ Performance and Theology, with a minor in Philosophy. He will be returning to Notre Dame in the fall to pursue a Master of Sacred Music degree studying with Huw Lewis in the concentration of Organ Performance.

Kelvin Wu graduates with a double major in Piano Performance and German Language and Literature. Starting in fall of 2019, he will pursue a Master of Music degree in Piano Performance at Indiana University’s Jacobs School of Music in Bloomington, IN, where he will study with Norman Krieger. He will also serve at IU as a teaching fellow in piano performance.