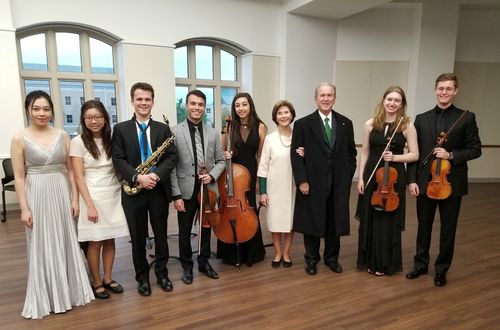 at the University of Notre Dame. As part of the festivities, the Bushes and other guests heard Department of Music students perform chamber music and opera scenes in the two rehearsal halls on the third floor of O'Neill and at a banquet in the Dahnke Ballroom of the Duncan Student Center.

The Bushes are longtime friends of Joseph I. O’Neill III, for whom the new music building is named, and his wife, Jan. A 1967 graduate of Notre Dame, Joseph O’Neill has served as a member of the University’s Board of Trustees since 2001. He is managing partner of O’Neill Properties Ltd. in Midland, Texas.

The 100,000-square-foot, seven-story O’Neill Hall is located on the south side of Notre Dame Stadium and was made possible by a gift to the University from Helen Schwab and her husband, Charles, in honor of her brother.

O’Neill Hall features the LaBar Recital Hall, LaBar Performance Hall, a music library, a lab for studio production, a lecture hall, classrooms and rehearsal spaces including the Michuda Family Rehearsal Hall (see picture), numerous practice rooms and faculty offices for both the Department of Music and the Sacred Music at Notre Dame program.