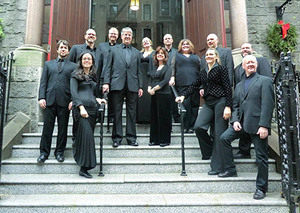 Alexander Blachly's ensemble Pomerium performed a program of "Music for Imperial Augsburg, 1518-1548" at Vassar College on September 21, 2014, and then again on September 28, 2014, at Yale University. This was a program designed to accompany an exhibition of Imperial Augsburg, 1475-1550 at Vassar College; it included music by Isaac, Senfl, Crecquillon, and Gombert.
On November 22, 2014, Pomerium performed "Music for the Rubens Tapestries" at the Getty Museum in Los Angeles. This was a program designed to accompany the exhibit Spectacular Rubens: The Triumph of the Eucharist, consisting of paintings by Peter Paul Rubens and tapestries based on them for the Convento de las Descalzas Reales in Madrid. The tapestries were delivered ca. 1625; Pomerium's program included music by the chapel master at the Convento at the time, Sebastián López de Velasco, by his contemporary Joan Pau Pujol in Barcelona, and by the previous chapel master of the Convento Tomás Luis de Victoria, his friend Francisco Guerrero, and by the leading Spanish master of the earlier sixteenth century, Cristóbal de Morales.