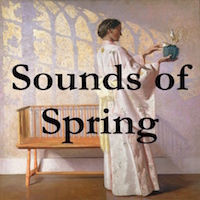 Liam Maher began violin at the age of eight. A native of South Bend, Liam has performed across the region as a soloist. For two years Liam served as concertmaster of the South Bend Youth Symphony Orchestra (SBYSO) and the Dake Academy Festival Orchestra. He currently works as a mentor for the SBYSO program. On top of mentoring, Liam is an instructor with the Saint Joseph Grade School Strings Program, a role he has held for seven years. He performs regularly in the South Bend Symphony, the Gaska String Quartet, and as Violin I in the People’s String Quartet, the fifth chamber ensemble of his career. In the past five years he has studied violin privately with Zofia Glashauser. Liam is majoring in Political Science with a supplementary major in Art History.

Maria Vigil has been playing piano since age four. Maria was the winner of the 2013 Jackie McGehee Young Artists’ Competition for Piano and Strings in her hometown of Albuquerque, New Mexico, and made several solo performance appearances with the New Mexico Symphony Orchestra. A Piano Performance major at Notre Dame studying under John Blacklow, Maria has continued to expand her repertoire, playing piano with the Notre Dame Symphony Orchestra, accompanying choirs, and collaborating with string players in chamber music settings. Maria has a supplemental major in Pre-Health studies.

This is a free but ticketed event. Call 631-2800 pr performingarts.nd.edu