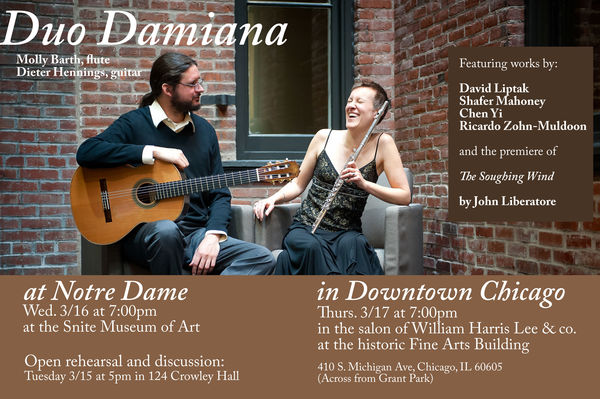 Duo Damiana consists of Molly Barth and guitarist Dieter Hennings.  The duo is focused on broadening the cutting-edge body of repertoire for flute and guitar.  In summer 2014, Duo Damiana mentored 97 young composers and numerous performers at the Oregon Bach Festival Composers and performed at the National Flute Association Convention in Chicago, IL. Past tours have taken Duo Damiana throughout the United States and to Mexico, with emphasis on the Midwest and the Pacific Northwest regions of the United States. Visit http://mollybarth.com/duo-damiana/

Described as "ferociously talented" (The Oregonian), Grammy-Award winning flutist Molly Alicia Barth specializes in the music of today. In demand as a soloist, Molly has recently performed in Australia, Korea, and Mexico and has played solo recitals and led clinics at esteemed institutions around the globe.  Contemporary chamber music is Molly’s primary musical interest, and she is currently involved with three ensembles. As co-founder of the Beta Collide New Music Project, Molly has collaborated with individuals from a broad spectrum of disciplines such as dance, art, sound sculpture and theoretical physics.  With Beta Collide, she has recorded two CDs and one DVD with Innova Records.   As a founding member of the new music sextet eighth blackbird from 1996-2006, Molly won the 2007 “Best Chamber Music Performance” Grammy Award, recorded four CDs with Cedille and was granted the 2000 Naumburg Chamber Music Award and first prize at the 1998 Concert Artists Guild International Competition.  Molly is the Associate Professor of Flute at the University of Oregon, where she is a member of the Oregon Wind Quintet.

The musical endeavors of Dieter Hennings Yeoman span from new music on guitar to early music for lute, baroque guitar, and theorbo.  Mr. Hennings has been a soloist with Canada’s New Music Concerts Ensemble, Tito Orchestra of Lecce, Italy, Eastman BroadBand Ensemble, Eastman School Symphony Orchestra, the University of Arizona Philharmonia, the Orquesta Filarmonica de Monterrey among many others. Mr. Hennings has won several prestigious competitions including the 2008 Aaron Brock International Guitar Competition, 2005 Eastman Guitar Concerto Competition, the 2002 Villa de Petrer, Alicante (Spain) International Competition, the 2001 Portland Guitar Competition, among others.  Since August of 2009, Dieter Hennings is Assistant Professor of Music at the University of Kentucky where he directs the Classical Guitar Studies program.