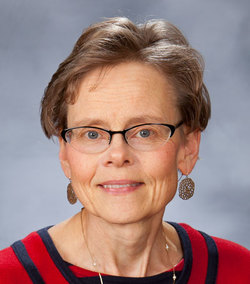 Mary Frandsen is a musicologist who focuses on Lutheran musical, devotional, and liturgical traditions in the early modern era. Her monograph, Crossing Confessional Boundaries: The Patronage of Italian Sacred Music in Seventeenth-Century Dresden, was published in 2006 by Oxford University Press. She has published articles in Musica Disciplina, The Organ Yearbook, Early Music History, Journal of the Royal Musical Association, and the Schütz-Jahrbuch, in collections of essays, and in scholarly dictionaries and encyclopedias, and has delivered papers at national and international conferences.

She has received fellowships from the ACLS and NEH, and a book subvention from the American Musicological Society. Her edition of the earliest known concertos with aria (or concerto-aria cantatas), composed by Vincenzo Albrici (1631-90) and Giuseppe Peranda (1626-75), will be published by Ries & Erler in the series Denkmäler der Tonkunst in Dresden, and her study of hymnody and liturgy at the seventeenth-century Dresden court will be published by Vandenhoeck & Ruprecht.

Frandsen’s current projects include a monograph on the role of Christocentric devotional music in seventeenth-century Lutheranism, and articles on changes in Lutheran music culture between 1560 and 1660, and on the presence of chant in the early modern German soundscape.

She is a member of various professional societies, and serves on the Executive Board of Frühe Neuzeit Interdisziplinär; she has also served as chair of the American Heinrich Schütz Society, on the governing board of the Society for Seventeenth-Century Music, and on the AMS Council. She is a co-editor of a new critical edition of the works of Sebastian Knüpfer, and served as the musicological advisor for the recording Vincenzo Albrici: Concerti Sacri (Musica Rediviva 2002, MRCD 008).

Frandsen teaches undergraduate courses for music majors and non-majors, and also teaches in the Master of Sacred Music and Doctor of Musical Arts programs.