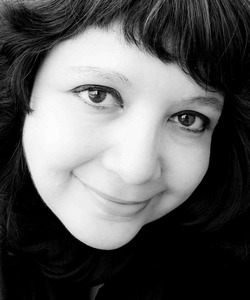 Venezuelan-American conductor and scholar Carmen-Helena Téllez has been called “a quiet force behind contemporary music in the United States today” by the NewYork-based journal Sequenza21. A multifaceted artist, she takes a co-creative approach to new music performance, devoting special attention to vocal-instrumental and staged genres, involving interdisciplinary media and musical scholarship, in an approach that The Washington Post has called "immersing and thrilling."

Carmen-Helena Téllez balances activities as a creative artist, conductor, scholar, producer and administrator. This year 2012 she joins the famed University of Notre Dame as Professor of Conducting, where she will teach conducting for the Sacred Music Program, and is slated to lead a series of projects in Interdisciplinary Sacred Music Drama in collaboration with Keough-Hesburgh Professor Margot Fassler with a grant from the Mellon Foundation. Previously, she was Director of Graduate Choral Studies and the Director of the Latin American Music Center at the prestigious Jacobs School of Music of Indiana University, where she also directed their Contemporary Vocal Ensemble.  She is also the Artistic Co-Director of Aguavá New Music Studio, an artists’ group with which she records and tours internationally. She has been the Resident Conductor of the Chicago Contemporary Chamber Players (Contempo),  the Music Director of the National Chorus of Spain, and a Visiting Professor at Dartmouth College.

Born in Caracas, where she completed conservatory studies in piano and composition, Carmen-Helena Téllez obtained a Doctor of Music degree with Highest Distinction at Indiana University in 1989.  Her document “Musical Form and Dramatic Concept in Handel's  Athalia” won the ACDA Julius Herford National Dissertation Award in 1991, and was the first study to propose the influence of Racine on the development of the modern oratorio.  She has maintained her devotion to music scholarship, and is currently writing books on Latin American Choral and Avant-Garde Genres.

As Director of the Latin American Music Center, Carmen-Helena Téllez supervised the largest collection of Latin American art music outside of the Library of Congress and a constellation of research and promotion activities. For the LAMC she has commissioned, premiered and recorded several works, organized three Inter-American Music Symposia and many special events, created a performance competition, produced a series of recordings, and implemented a Latin American ensemble and several courses.

As Director of Graduate Choral Studies she taught the doctoral seminars in the role of mentor once undertaken by Julius Herford, George Buelow, Thomas Dunn and Jan Harrington, and continues to be the director of several doctoral final projects.

As Professor of Conducting she has conducted 20th-century masterpieces by Stravinsky, Ligeti, Schnittke, Xenakis, Lutoslawski, and many others; but she also has conducted the canonic symphonic-choral repertoire. In the year 2000 she became the first woman on record to conduct the monumental Grande messe des morts by Hector Berlioz with 450 performers on stage. For her innovative approach to pedagogy through creative collaboration, Carmen-Helena Tellez received the Tracy M. Sonneborn Award at Indiana University in 2010.

Carmen-Helena Téllez has been responsible for the commission and world premiere of many works that have garnered the highest critical praise. In 2008 she produced and conducted the video-opera Unicamente la verdad, by Mexican composer Gabriela Ortiz and video artist Rubén Ortiz-Torres. In 2006 she conducted the world-premiere of James MacMillan's Sun-Dogs, a work she co-commissioned for the Indiana University Contemporary Vocal Ensemble. Mario Lavista's Missa ad Consolationes Dominam Nostram,  Cary Boyce's Ave Maria  and Ingram Marshall's Savage Altars are among the works commissioned and premiered by Carmen-Helena Téllez that have established themselves among the most distinguished choral compositions of the last few years.

Carmen-Helena Téllez has also brought important contemporary works to audiences in the American Midwest for the first time, including Osvaldo Golijov's opera Ainadamar, John Adams's opera-oratorio El Niño, as well as the American premiere of Ralph Shapey's oratorio Praise, originally composed for the celebrations of the 50th anniversary of the foundation of Israel. As part of her increasingly focused dedication to interdisciplinary presentation, she co-created an immersive theatre production of Don Freund's Passion with Tropes in May 2011, in collaboration with artists Robert Shakespeare, Susanne Schwibs and Margaret Dolinsky. In 2009 she designed and conducted for the University of Sao Paulo a multimedia performance of Orff’s Carmina Burana as a commentary on the artist and fascist society. In October of the same year she conducted the fiendishly difficult Svadebka  (Les Noces)ballet by Stravinsky at Indiana University, and is currently  working on an art-video installation based on Pulitzer composer Shulamit Ran’s Credo/Ani Ma’Amin. Her art video The Bells of Leopardi, based on a staged performance of a composition by Yehuda Yannay, can be viewed in YouTube.com.  As an outgrowth of these explorations, Carmen Helena Téllez has returned to composition, and will include some of her own works in Aguavá's upcoming seasons.

Carmen-Helena Téllez has won grants and awards from the US-Mexico Fund for Culture, the Rockefeller, Mellon and Lilly Foundations,  the Indiana Arts Commission, and the United States Information Agency. She is also a respected consultant on contemporary Latin American music and has assisted important professional organizations in the United States and Europe, including Los Angeles Philharmonic, the Chicago Symphony, and the American Composers Orchestra. She has also been a board member of the American Composers Forum as well as an adjudicator for the Tomás Luis de Victoria and Otto Mayer Serra Prizes Composition and Musicology Prizes. She has written several entries for the Grove Dictionary of Music and has lectured on contemporary Latin American repertoire and on interdisciplinary performance in the United States, Latin America and Spain. She has also collaborated with international organizations like the Mexico Philharmonic and Colegio Nacional de Mexico, for which she recorded a CD of the unpublished works of Carlos Chávez. She continues to conduct orchestras nationally and internationally.