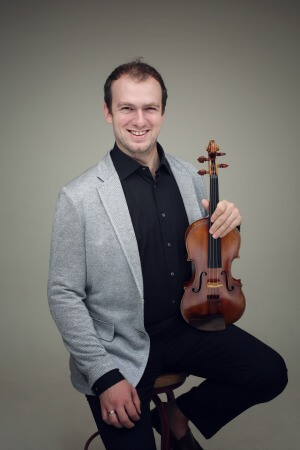 Faculty, Visiting Assistant Professor of the Practice, Violin and Viola

Brendan has performed across the world in collaboration with many world class ensembles and as a soloist. He premiered Frederic Rzewski’s Night, Death, and Devil with the Emmy Award winning 8th Blackbird. As a founding member of the award winning Wasmuth Quartet(now Verona) he performed across the United States, Germany, and Japan. His solo career has taken him across the globe as well, with performances in major venues in Europe and Asia, and across North America. In 2014 he partnered with his wife Yerin Kim to form the Shea-Kim Duo, which has competed internationally and performed recitals in Asia, Europe and North America. Their performances have been broadcasted by Klara Continuo in Belgium, PBC in South Korea, and WUFT Classic in Florida. Their first CD was recently released by Ark Studio in Seoul, South Korea.

In addition to his performance career, Brendan is also a sought after violin teacher and chamber musician. He taught violin and chamber music at the Mahanaim School in Huntington, New York and will be teaching violin at Oberlin Conservatory in February as a guest faculty. He also joined the Euclid Quartet in fall of 2016 as second violinist, and the faculty of Indiana University South Bend.

Brendan Shea is a former student of Zakhar Bron and Milan Vitek. His mentors during his doctoral studies at Stony Brook  include Jennifer Frautschi, Hagai Shaham, Philip Setzer, Arnaud Sussman, and many wonderful musicians from Oberlin, Indiana, and New York. He currently plays on a 2000 Samuel Zygmuntowicz made for Angela Ahn.