Daniel Schlosberg, assistant professional specialist  was recently recognized in an article written by Kyle MacMillan and 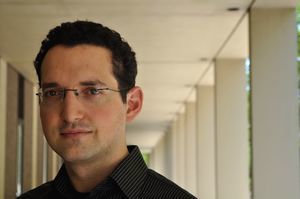 published by the Chicago Symphony.

" Pianist Daniel Schlosberg is Mr. Versatility. Solo recitalist. Orchestral soloist. Solo accompanist. Chamber musician. Now based in Chicago, the Los Angeles native can do it all, and he regularly gets calls for his services from a broad range of the city’s classical musicians and ensembles, including eighth blackbird, Dempster St. Pro Musica and the Avalon String Quartet, as well as others across the country.

“I definitely prefer a wide variety,” he said. “A lot of my interests are toward the outer limits of the repertoire, so I do have a big interest in early music as well as the very contemporary composers. My dad was an amateur viola da gamba player, so I grew up with the sounds of early music around me, but I’ve also been very involved with new music with various groups in Chicago and elsewhere.”

At the same time, Schlosberg does not neglect more conventional 18th- and 19th-century classical repertoire. “There is nothing I enjoy more than accompanying a Schubert song,” he said. Indeed, accompanying singers is one of his specialities, and he regularly collaborates with such artists as Chicago-based baritone Ryan de Ryke. Schlosberg studied with Gilbert Kalish, a renowned vocal accompanist, while completing his doctorate at Stony Brook University in suburban New York City, and he pursued additional training in this realm at the Britten-Pears Young Artist Programme in Aldeburgh, England, and the Franz Schubert Institut in Baden bei Wein, Austria. Since 2010, he has directed the Baltimore Lieder Weekend, which includes performances and scholarly discussions of art song.

Vocal accompaniment presents challenges for a pianist that go beyond those associated with backing a solo instrumentalist. “There is probably more flexibility that is needed,” Schlosberg said, “just because of the nature of using one’s voice, and also, of course, you have to know intimately the text, not just what the words mean but the meaning of the poem and what the composer’s reaction is to the poem.”

Schlosberg is a member of the piano faculty at the University of Notre Dame near South Bend, Ind., but he does much of his performing in Chicago. “There’s so much going on, especially with the new music scene,” he said. “There’s more going on in New York, but there’s just so much support for the community here and everyone supports each other, so I think it’s really a healthy environment. I just like the slightly less hectic atmosphere, compared to New York. And of course, the CSO is an incredible institution and resource.”