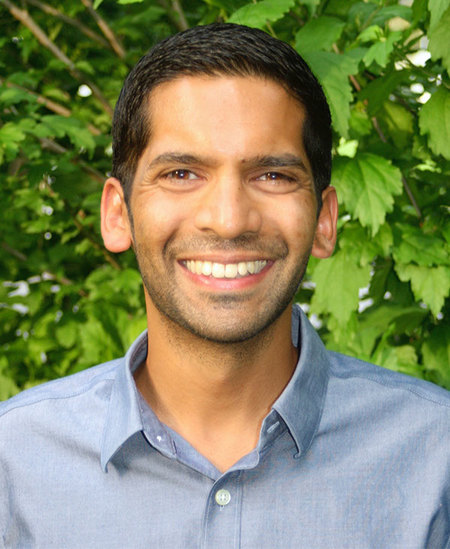 For Christopher Chowrimootoo, there’s nothing unusual about a musicologist teaching in the Great Books program.

That’s because, like his research, the Program of Liberal Studies is fundamentally interdisciplinary.

“My research is not just about music in a technical sense,” he said. “It’s about drawing connections between music, literature, and aesthetics.”

Chowrimootoo, an assistant professor who came to Notre Dame in 2013 after earning his Ph.D. at Harvard, primarily tries to bring music into wider conversations about the “middlebrow” in literature, film studies, and cultural history. This originally pejorative term implied cultural aspiration, using “highbrow” art to achieve a higher social and aesthetic status.

“It was associated with cultural institutions like the BBC and the Book of the Month Club, which made high culture available to a new mass audience by technology and marketing,” Chowrimootoo said. “It also referred to the aspirational audiences and readers to whom the institutions catered, not to mention the artworks created for them.”

Interdisciplinarity is also on display in the Fine Arts tutorial each PLS student takes, where Chowrimootoo ensures his students make the connections between art, philosophy, and music that give him his unique insight into music and culture.

“We read Kant’s Analytic of the Sublime and listen to Beethoven,” he said. “We read theories of impressionism alongside impressionist paintings and music, and try to propose connections between literature, philosophy, and music, while preserving the special aspects of music.”

The idea of the middlebrow is useful to Chowrimootoo because he wants to challenge what music scholars have long perceived as a “great divide” between works by modernist composers like Arnold Schoenberg and the popular music and operas of the 20th century.

Chowrimootoo’s first book, Middlebrow Modernism: Britten’s Operas and the Great Divide, explores the relationship between English composer Benjamin Britten and the newspaper critics who policed 20th-century cultural boundaries. Britten, born in 1913, was one of the first composers to be influenced by mass media such as the BBC.

As a result, even though he claimed to reject the sentimentalism and lyricism of the previous century’s operas, Britten composed works like Peter Grimes and War Requiem, which drew on those exact qualities to appeal to mass audiences but also on the innovations of 20th century modernist composers.

“What struck me is this kind of eclectic flitting back and forth between high and low styles, using tropes from popular culture but drawing on the most elite of high art music,” Chowrimootoo said.

Critics, meanwhile, “highlighted only the most respectable aspects and explained away things like lyricism, spectacle, and sentimental plots,” Chowrimootoo said. “Clearly, they were as ambivalent as Britten.”

“By making a space for ambivalence and contradiction, you realize that no one’s free from these tensions. Once you start to think about the possibility of a middlebrow, it becomes clear that there’s no such thing as a pure highbrow or lowbrow.”

So what do composers like Britten say about the “great divide” between elite and mainstream music?

“By making a space for ambivalence and contradiction,” Chowrimootoo said, “you realize that no one’s free from these tensions. Once you start to think about the possibility of a middlebrow, it becomes clear that there’s no such thing as a pure highbrow or lowbrow. I’m aiming at nothing less than the complete destabilization of cultural hierarchies and boundaries.”

Chowrimootoo, who has a concurrent appointment in the Department of Music and Program of Sacred Music, brings the tensions between “high” and “low” art into his sacred music courses. In an upcoming course for the newly endowed Calvin M. Bower Doctor of Musical Arts program and his next book project, he’ll study composers like Igor Stravinsky, Olivier Messiaen, and Francis Poulenc, examining how they blurred the boundaries between sacred and secular.

“I’ll explore how they manage to evoke things like sublimity, uplift, and transcendence in supposedly secular spaces like the concert hall and opera house,” he said, “and how critics responded to these supposedly obsolete registers.”

Originally published by Emily McConville at al.nd.edu on December 04, 2018.