John Liberatore, Assistant Professor of Composition and Theory, has been awarded a fellowship from the prestigious MacDowell Colony in Peterborough, New Hampshire. As an artist-in- 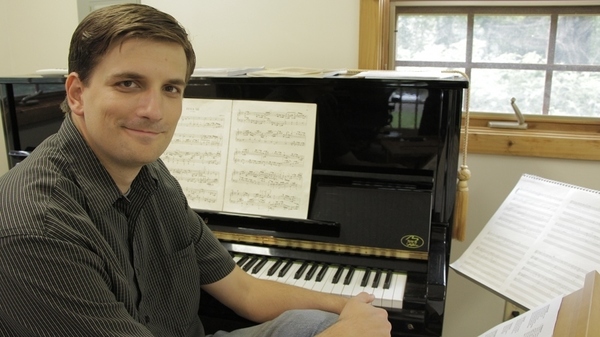 residence in the spring of 2017, he will spend his time at the colony composing a song cycle for soprano, percussion, and glass harmonica, based on translations by Niloufar Talebi of contemporary Iranian poetry. The finished work will be premiered by soprano Jamie Jordan, a much sought-after interpreter of new music and recent guest of the Department of Music, and Daniel Druckman, associate principal percussionist in the New York Philharmonic and director of percussion studies at the Julliard School. Professor Liberatore will join Jordan and Druckman on the glass harmonica, a rare instrument that he acquired earlier this year through a Faculty Research Support Program Initiation Grant.

Founded in 1907 by Marian MacDowell, pianist and wife of composer Edward MacDowell, the MacDowell Colony is the oldest and perhaps most competitive artist colony in the United States. According to its mission statement, the colony seeks to “nurture the arts by offering creative individuals of the highest talent an inspiring environment in which they can produce enduring works of the imagination.” Since its founding, the colony has hosted over 7,500 artists, including composers, architects, writers, filmmakers, and visual, theater, and interdisciplinary artists. Alumni of the MacDowell Colony include such luminary figures as Aaron Copland, who worked on his iconic ballet Appalachian Spring as a fellow in 1944, and Leonard Bernstein, who completed his Mass as a fellow in 1970.