The Notre Dame Department of Music and Sorin's Restaurant Present 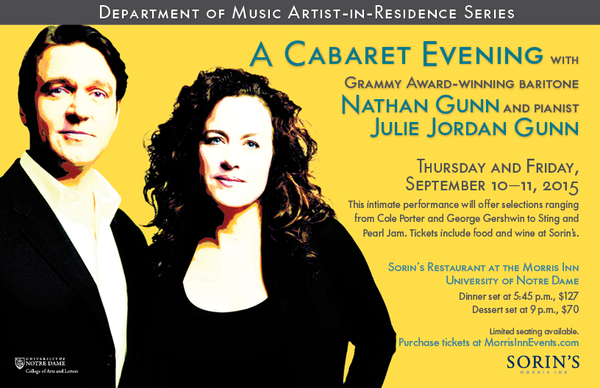 Nathan Gunn visits the University of Notre Dame semiannually as part of an Artist in Residence Program where he collaborates with students, faculty and the Notre Dame community.

​South Bend native, ​
Nathan Gunn has made a reputation as one of the most exciting and in-demand baritones of the day. His cabaret program with wife and pianist Julie Jordan Gunn includes an eclectic mix of standards and other favorites from composers as diverse as William Bolcom, Cole Porter, Harold Arlen, Tom Waits and more.

“Nathan Gunn commands an operatic baritone whose mighty heft and richness confer an outsize authority on everything he touches.When he dips into popular music, he suggests a vocal Babe Ruth aiming for the fences, all the while maintaining a hero’s confident stance. -”The New York Times​"​