The Secret Gospel of Mark Unveiled Imagined Rituals of Sex, Death, and Madness in a Biblical Forgery 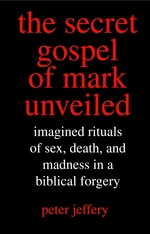 In 1958, Bible scholar Morton Smith announced the discovery of a sensational manuscript–a second-century letter written by St. Clement of Alexandria, who quotes an unknown, longer version of the Gospel of Mark. When Smith published the letter in 1973, he set off a firestorm of controversy that has raged ever since. Is the text authentic, or a hoax? Is Smith’s interpretation correct? Did Jesus really practice magic, or homosexuality? And if the letter is a forgery . . . why?

Through close examination of the “discovered” manuscript’s text, Peter Jeffery unravels the answers to the mystery and tells the tragic tale of an estranged Episcopalian priest who forged an ancient gospel and fooled many of the best biblical scholars of his time. Jeffery shows convincingly that Smith’s Secret Gospel is steeped in anachronisms and that its construction was influenced by Oscar Wilde’s Salomé, twentieth-century misunderstandings of early Christian liturgy, and Smith’s personal struggles with Christian sexual morality.

To purchase this book visit this link.