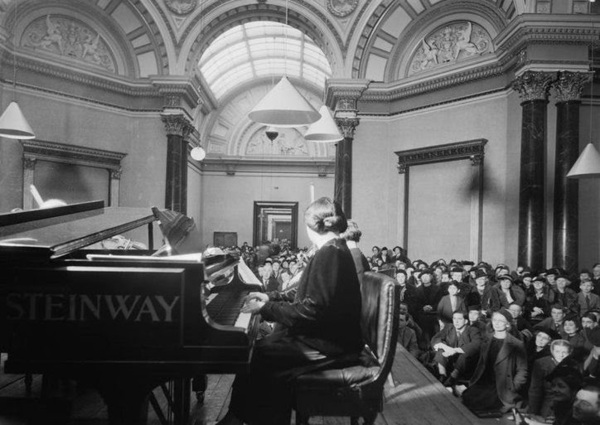 In the mythology around Second World War Britain, the pianist Myra Hess’s lunchtime concerts at the National Gallery hold a prominent place. In September 1939, theaters and concert halls had been hastily closed and public gatherings prohibited. The National Gallery concerts constituted some of the first glimmers of normal cultural life in wartime, and would continue to be held every weekday throughout the war. They were widely seen as a testament to British fortitude, to a widespread ‘hunger’ for the arts, and to the necessity of music even in a state of total war. In a sign of their cultural importance, the concerts featured frequently in wartime films, most powerfully in the experimental documentaries of Humphrey Jennings. However, as this paper will suggest, these films seem to approach the concerts as a kind of problem, raising questions about the role of sound, music, and listening in total war, and about the limits and costs of music’s mobilization.

Heather Wiebe is Teaching Professor in the Program of Liberal Studies at Notre Dame. Previously Reader in Music at King’s College London, she is the author of Britten’s Unquiet Pasts: Sound and Memory in Postwar Reconstruction (Cambridge, 2012) and the forthcoming monograph Mobilizing Music in Wartime British Film (OUP, 2023). For the latter project, she was awarded a Leverhulme Trust Research Fellowship.