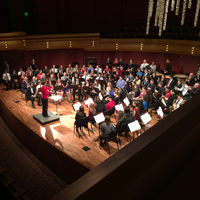 The University Band at Notre Dame is the school's most diverse performing ensemble. Featuring faculty, staff, alumni, graduate students, and undergraduate students, musicians come from all walks of life and musical backgrounds. This year's program will feature the works of John Philip Sousa, Jach Offenbach, and James Curnow, among numerous other prominent composers.