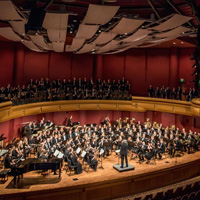 The Notre Dame Band presents its annual Commencement Concert, featuring members from the concert band program. This performance will be the final time that senior band members will perform at the Debartolo Performing Arts Center, and is a run-up to both Commencement weekend and the band's annual tour. Selections on the program will include wind band classics, orchestral transcriptions, jazz tunes, and some traditional Notre Dame favorites! Dating back to 1845, the Notre Dame Band is the oldest college band in continuous existence in the United States. The Band was the recipient of the 2011-2012 Sudler Trophy, considered the Heisman Trophy for college bands, and was declared a "Landmark of American Music" by the Indiana Music Educators Association.

Family friendly, all ages are welcome. This is a free but ticketed event.